I first read Joseph Conrad’s story 'Il Conde' (The Count) when I was around fourteen, in a volume called Four Tales (which I can see in my mind as a maroon cloth-bound book, with cancelled library stamps), in turn the four stories in this book came from a slightly larger collection A Set Of Six; the stand out story of Four Tales is clearly 'The Duel'. Given most other things I was drawing then, I would have thought that I should have been more attracted to the Napoleonic protagonists of 'The Duel', but for some reason 'Il Conde' was the one that prompted me to make a drawing inspired by it (I also missed the homosexual subtext in the central encounter of the narrative). I recall making a large pencil drawing of what I imagined the Cafe Umberto from the story might have been like. This was probably inspired by some memories of Czechoslovakia, my most recent experience of the continent but also, I think, Gatwick Airport, where I had made drawings in the early hours of the morning while waiting for our plane. I finally got to Naples in 2004, but don’t remember even thinking about 'Il Conde' - or the drawing - when I was there. I realise that my drawing was based on the brief description in the text:


“The monumental arch of the Galleria Umberto faced him at the top of a noble flight of stairs. He climbed these without loss of time, and directed his steps towards the Cafe Umberto. All the tables outside were occupied by a lot of people who were drinking. But as he wanted something to eat, he went inside into the cafe, which is divided into aisles by square pillars set all round with long looking-glasses. The Count sat down on a red plush bench against one of these pillars, waiting for his risotto. And his mind reverted to his abominable adventure.”

This was supplemented with my ideas, gathered from television and film, of what such a space might look like in the early 20th century ('Il Conde' was first published in 1908, although as much as I can remember what my drawing of Cafe Umberto looked like, it had more of a feel of the 1920s or 30s). The drawing did have the pillars with mirrors, crowded by the chairs and tables, all done with a box of pencils I had recently been given, ranging from 4H to 9B. I used this range for carefully shading in the drawing, a method quite given up on later, the idea that one might need more than one weight of pencil in a rendering. The original drawing is long lost, probably destroyed like similar juvenilia of the time, and if found would only be a disappointment. A drawing from the Cafe Apropos in Copenhagen will have to stand in for the Umberto. 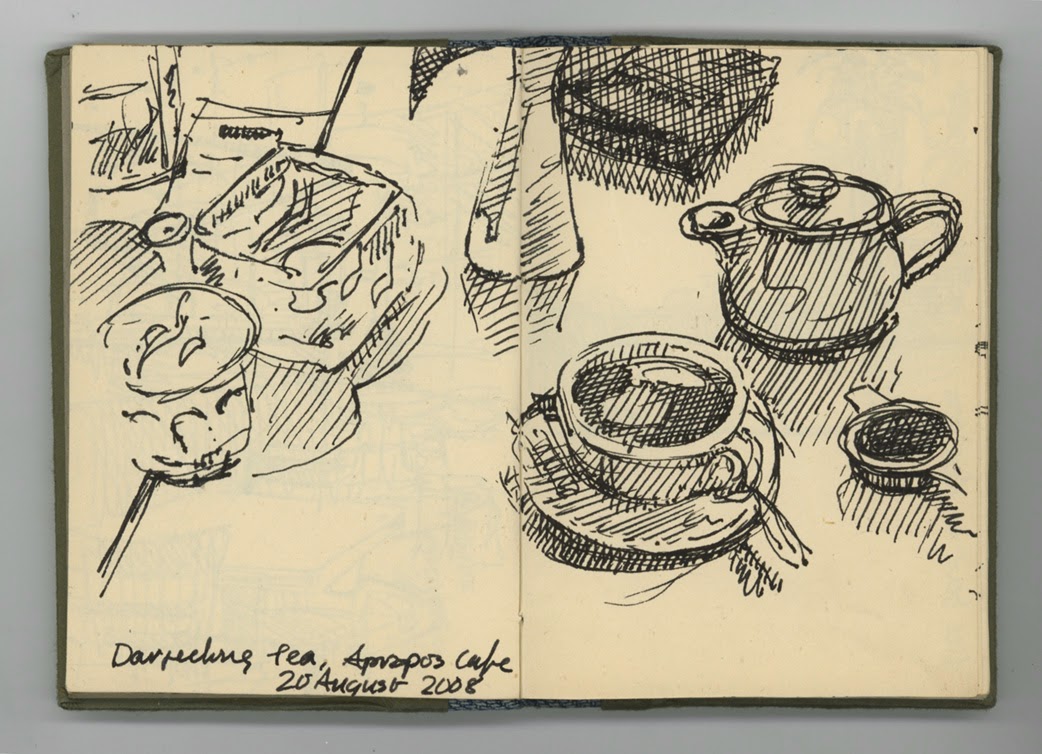 Posted by Nicholas Middleton at 09:00